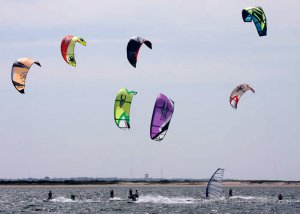 Last summer a miraculous conjunction of weather and scheduling occured and the Race Week Kiteboarding Race went off in an awesome fashion.  My role was to help run the race and I was also able to participate in the race.  Helping to run the race made a difference in how well my result in the regatta turned out.  The only thing I knew about running a kiteboard race was what I have read in different magazines and being on the water at Crissy Field for two afternoons during their race days.

We were learning as we went and we made a bunch of quick modifications as the day went on.  The first race went off with the race committee being on Bass Point and the starting line was between a mark and a flag on the beach.  However they were downwind from the starting line so they ended up giving signals that no one could hear.   So for the second race we put a boat  at the boat end of the starting line, which is pretty much standard operating procedure for sailing races and that issue was resolved.   Much of what I learned doing this regatta goes under the heading of  “It should be run exactly as a normal sailing regatta.”

For last summer’s race we got great SW wind in the afternoon.  People were able to ride mostly 12s I would say.  It lined up perfectly to set up a modified triangle course using two chanel markers and one set mark and having the start just upwind of bass point and the finish on the leeward side of Bass Point.  So Bass point was right in the middle of the weather leg.  It worked out really well for staging.  It would be perfect if it could always set up like that.  I wouldn’t have the finish on land again.  I think it would be better to just set up a normal finish line just below Bass Point.  Of course we can’t always plan on SW wind so we have to be able to set the course completely and then we woud just have a normal modified triangle with start/finish line in the middle.  I think it would be smart to have the start/finish line as close to Bass Point as possible because its good to put your kite down between races if possible.

Another mistake I made in the first race was thinking it would be better to set the starting line looser than normal.  Basically the line wasn’t square and it favored the boat end.  I thought it would for kiting but again it turns out to be better to just set up everything like a standard dingy course.  One of the guys from Community Sailing was trying to tell me this but I had to learn it for myself.

This entry was posted in Lessons Learned. Bookmark the permalink.

One Response to Improving at Running the Race Week Kiteboarding Event