Its a truism that the more time you spend on the beach the more good kiting you are going to get.  But when you peel a few layers off of that onion it is clear that there is much more to it than just hanging out at your favorite spot.  Of course everyone knows someone who can be at the beach a lot more than the rest of the crew, and yeah, they do get more kiting time, but it is also true that some study and thought and a bit of effort can help the rest of us be in the right place at the right time.

Last weekend’s run was a good example of this. A bunch of marginal SW days one after another.  Saturday I think I got a marginal 12 day.  Everyone was frothing for a good day on Sunday.  I thought the forecast was weak but whatever, I’m not going to be putting negative energy into everything.

The forecast was weak, but not horrible.  The offshore was saying something like 5-10 in the morning increasing to 10-15.  The morning was pretty flat calm.  But the tide was going out until 2:30 and some of the forecast sites were showing 18 in the afternoon.  My gut said that 12:30 was going to be the time to be at the beach and it was going to be sailable until the tide turned.  That was just my analysis of the weather and the feeling I had about the day.

I rolled out to the beach at 12.  It looked breezy but not particularly exciting.  Basically the same as the day before when it had been marginal.  I rigged my 12 and as I was doing it it just felt better and better.  By the time I finished rigging it was fully filled and I went out pretty solid, if not over on my 12.  Rode that for about 45 minutes as other guys showed up and rigged.  Quality sailing was had for a while.  After an hour I came in and had to run home to drop my son off.  By the time I got back about a half hour later it had really calmed down.  Guys were still out but the breeze had lost its punch.  So there had been a window of about an hour and a half that it had been worth being there.  This time it worked out for me.

A similar thing happened to my friend and sailing partner Jeff the next day on the Cod.  He was at West Denis and it was pretty uninspiring.  But since he was over there he rigged his 12 and had some meager runs.  Just when he was about to bag in disgust it filled in and he got a half hour of solid 12.  Then it shut down completely.  Other guys who weren’t rigged scrambled to catch some in vain. It was too short of a window to catch it if you weren’t right on it.  So that can happen sometimes.  You have to put in the time and sometimes comit to just messing around in the hopes that you will get some quality. 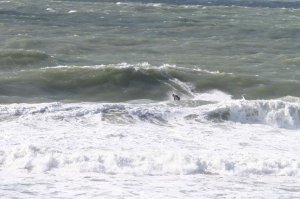 Madequecham on a Solid West – Go when its good and the Ocean will reward you.

But sometimes you can just look at the forecast and know when to go.  Then it takes commitment and a job with flexible hours to really score.  We have been hitting the shit out of the West recently.  Its all because we are getting on it mid-day.  When you have a solid 9 or 7 ocean session under your belt from earlier you don’t really have to worry about chasing the dying remains after work.  You schedule your sailing as much as possible around the best part of the day and fit the rest of your life in around that.  If you can do it you end up getting the best of most days.  I won’t do it for a flat water session but I will make that commitment to the ocean.  Its just so worth it.

This entry was posted in Lessons Learned, Sessions & Conditions. Bookmark the permalink.