I’ve got a mix of 4 and 5 line kites and I go back and forth.  I love the performance of my C kites and the utter reliability of the fifth line in solo situations.  On the other hand my 4 line bridle kites have helped me take my ocean kiting to a higher level and the simplicity of the 4 line bar is a benefit.  So I see both sides of the issue and acknowledge the valid points but what I don’t go in for is the “4 line kites have more depower” line of argument.  Depower is primarily in the bar setup, not the kite design.

In the past I rode Naish Torches a lot.  Its a well known and long standing C style kite on a 5 line bar.  Before that I had a bunch of C kites on 4 line bars as well, but there’s no reason to delve into ancient history.  Going back 5 years is enough to see the clear link between bar throw and overall kite depower.

I had a 12 Torch and its bar had a chicken loop line that was normal at the time.  About a foot of throw before the stopper ball with a depower strap above the bar.  When it was windy and you pushed the bar away it would often “max out” against the stopper ball and that was it for your depower.  I used the depower strap a lot to tune the kite but at a certain point, in a gust, you would use all your depower and then just have to dig hard on your edge and ride it out.

This was a little after the introduction of the 4 line Best Waroo, the first “bow kite” that was really popular in my area.  It was known as having its “unlimited depower” which was attributed to its new style design.  So the prevailing wisdom was “C” kite – grunty and hard to manage, “Bow” kite – unlimited depower and smooth performance.

Then later that year I got a 9 Torch and it came with a different type of 5 line bar.  It had a much larger throw on the chicken loop and its depower line was under the bar.  All of a sudden the 5 line kites had dramatically more depower.  A never used the depower adjustment any more and I haven’t really used it since.  Naish came out with retrofit kits for older 5 line bars to replace the chicken loop assembly.  It was a clear step forward in kite performance that had nothing to do with the design of the kite.

For the past three years, when I was visiting California a lot, I got a couple of RRD Type 9s for my West Coast quiver.  They are bridle kites but the bar that came with them was similar to the Naish bar I described above.  About a foot of throw on the chicken loop line with a stopper ball at the end.  And the result was the same limited performance.   On the west coast I mostly sailed the ocean and you can really see it clearly there.  If you are fully lit you need a lot of push away on the bar when you are doing your bottom turn. If you max out on it you can easily get pulled off your line and then not get set up correctly for your top turn. I always thought there was something that wasn’t right with those kites, although I had a lot of good sessions on them.  Then I brought them home to Nantucket and started riding them on Naish 4 line bars with more chicken loop throw and again the performance improved dramatically, especially in the ocean.  More evidence that the extended depower comes more from the bar design and less from the kite. 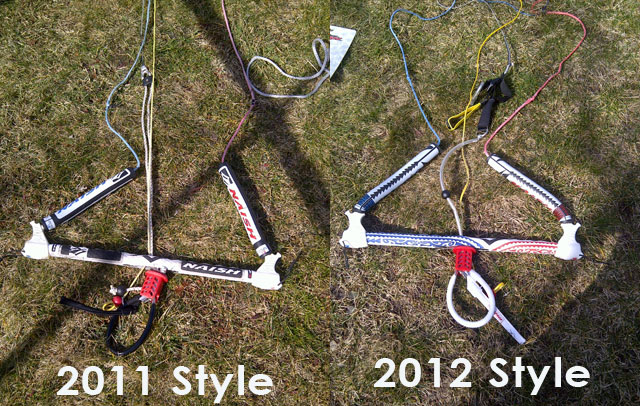 Note the plastic coated chicken loop line with stopper ball on the 2012. About a 1 foot throw.

So I was very surprised when I unrolled my new 2012 Naish Shift 5 line bar and found that they had gone back to the old style setup.  The new bar is nice in every way but instead of the longer, double rope for the chicken loop line, it now has a one piece, plastic coated line with about one foot of travel and a solid stopper ball at the top.  I rigged it for the first time on a building 12 day on the ocean with my Torch and as the wind picked up I became more and more frustrated with the kite’s performance on the new bar set.  It was as I described above, you are making your bottom turn and you max out on the bar depower, then you get slightly pulled off your line and aren’t set up properly for your top turn.  Its nothing you can’t live with and work around but you know it isn’t optimal.  I was very surprised, shocked really that they changed the design like that.  To me it is a step backwards in performance.  The only reason I can think to do it is that they wanted to go back to a plastic coated chicken loop line because the non-coated lines were wearing through really quickly.  Its true.  I replaced the line on my last 5 line bar after half a season and it was even quicker on my new 4 line bar.  That one needed a new chicken loop line after only two months of hard riding.  So I can understand that people were probably complaining about that, especially when the replacement lines are like $45 or even more if you have to replace the whole chicken loop assembly, which I think costs around $125.  But you can’t go backwards in performance.  And once you’ve had it good you aren’t going to ride your 5 line kites that way.

I was pretty upset about it because a new bar costs almost $500 and it made one of my favorite kites pretty much un-rideable.  But we got it worked out. I wrote to Real Kiteboarding where I had bought the thing and they communicated with Naish and they send me a replacement line and swivel connector from last year and it seems to have all gone back together pretty nicely.  The actual chicken loop is the same on the 4 and 5 line bars, but on the new 5 line you don’t use the cleat because the depower adjustment is above the bar old school style.  But that makes it pretty easy to replace the chicken loop line and the connector to the flying lines and you are pretty much back in action with about 50% more bar through I would estimate.  Naish says that when you do that you have to move the back lines down one knot at the bar connection.

I haven’t had a chance to test it since I re-rigged it but it all looks good.  Hopefully it will fly right as well.  I think it will.  Thanks a lot to Tommie at Real Kiteboarding and his contacts at Naish for working with me to get it back to good.

This entry was posted in Equipment Notes. Bookmark the permalink.