Insane conditions last week.  Really strong wind and surf that was easily in the well overhead range.  I really felt like getting worked could be really bad.  A couple of days later  on the radio that there was a strange weather condition in which the jet stream was pushed lower towards the surface. 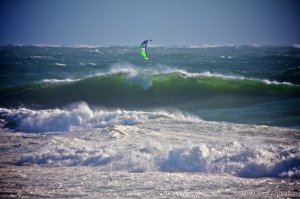 At around 11 am the rain stopped and the airport said something like SW 25. I rigged my 9.  I knew it was too big and I was right.  I was super over.  Rigged down to my 7 and that was more manageable.  Still the surf was sick. It took me three tries to get out.  The whitewater was insurmountable.

Bad day for equipment issues.  Sasha’s photos make my session look a lot better than it was.  And he took those before getting in his own epic downwinder from Madaket to Tom Nevers.  Nice!  That is sick!

This entry was posted in Uncategorized. Bookmark the permalink.