Notes on the Naish Park 9. A very nice 4 line kite with short bridles and 3 struts. It pumps up very quickly and once inflated, its profile looks exactly like a “c” style kite with a pretty deep canopy and bunt wingtips. It looks cool in the sky. Mine is red and black and one half of the kite displays some cool tiki god logo that you can see from the beach. It looks high performance and yet classic at the same time. Its nice.

My first few sessions I was surprised by how light the bar pull was. I felt like I might be underpowered but I was riding fine. It could have been a little light. But I think the bar pressure is less than my Torch or Helixs. Still it is very snappy and responsive. Its a modern kite with a great bar setup and handles well over powered. I think it is best at riding in the surf and I’ve had my best h feeling where it is in the surf. Good jumping and control during fight. These are the most noticeable performance characteristics that I have noticed so far. It whips nicely out of downloops but I haven’t looped it too much to speak on it. I haven’t unhooked yet either. 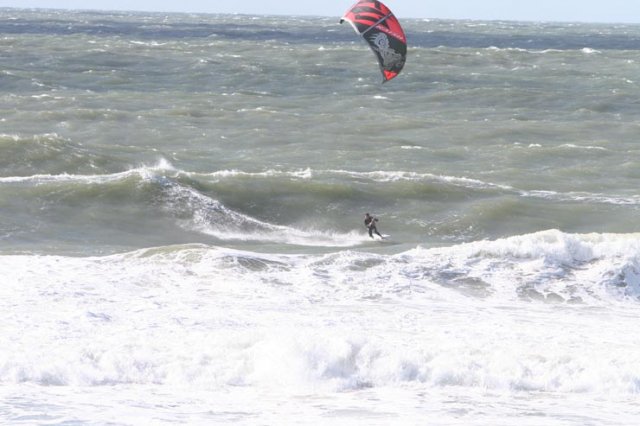 The Naish Park 9 rips it in the surf

The Park has the solid, bomber construction that I have come to expect with Naish equipment. the octopus inflation system is still the best one pump system I have seen. This is the first Naish kite I’ve gotten with a stopper ball in the inflation valve of the main bladder. A good improvement. Of course it has the normal disadvantage that every 4 line kite has for self landing but it also has a real noticeable simplicity about it that I think makes it a really nice all around kite. I’ve only got 18 sessions on it since October but I like it so far.

This entry was posted in Equipment Notes. Bookmark the permalink.